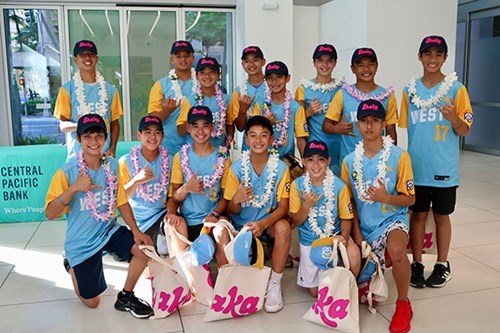 The Honolulu Little League team was presented with a $10,000 check from the CPB Foundation at its Downtown Honolulu Main Branch.

HONOLULU, HI (Sept. 2, 2022) – Central Pacific Bank Foundation today presented a check for $10,000 to the Honolulu Little League world championship team and CPB sent its sincere congratulations to the players and coaches who made all of Hawaii proud. We are also happy to say a member of the CPB ohana was part of the championship team. Kobe Hino, #4, is the son CPB Vice President and Director of Accounting Scott Hino, who traveled with the team and was able to watch the action in person.

The CPB Foundation first donated $5,000 to the team before the tournament began to help offset travel expenses and today the Foundation is adding another $5,000 to pay for a pitching machine and other equipment for the team.

“As a former player and lifelong baseball fan I am thrilled for the Honolulu Little League team and am so proud of their accomplishments,” said Central Pacific Bank Executive Chairman Paul Yonamine. “What is most impressive is the Hawaii teams always spread the aloha spirit throughout the tournament and to the televised audience watching around the world making the whole state incredibly proud!”

“My wife Brandi and I are so grateful and blessed that Kobe and his teammates earned this once-in-a-lifetime opportunity and we are so proud of what they accomplished both on and off the field,” said Scott Hino, CPB VP and director of Accounting and Kobe Hino’s dad. “As a parent, it was such an incredible and surreal experience. Thank you to CPB and everyone who helped make this unforgettable memory possible.”

“We send sincere congratulations to Manager Gerald Oda and his coaches for winning their second Little League World Series championship. The CPB Foundation is happy to sponsor the team and buy a pitching machine to help carry on Hawaii’s winning tradition,” said CPB Foundation Executive Director Keith Amemiya. “We congratulate our own Scott Hino, his son Kobe, and their entire family on this incredible achievement, especially considering it can be much more stressful for the parents watching than the child playing!”

Hawaii has sent a team to Williamsport, Pennsylvania 15 times, winning an impressive four championship banners and claiming runner-up honors twice. Hawaii’s last championship came in 2018. The CPB Ohana was also represented on that team as Business Products & Services Mel Okada’s son Caleb, who also wore #4, was a contributing member of the successful squad. 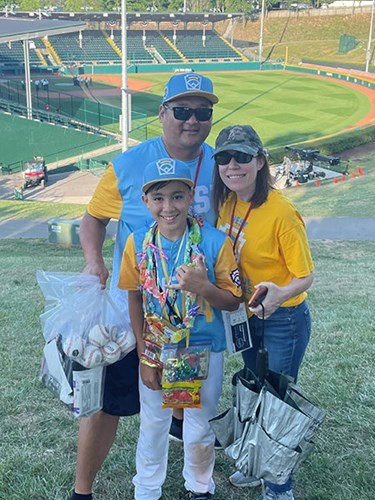 Scott and Brandi Hino with their son Kobe in Williamsport, Pennsylvania during the championship tournament. 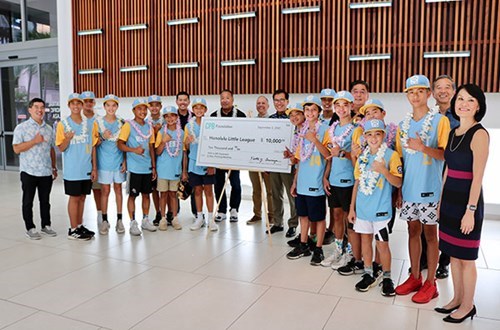 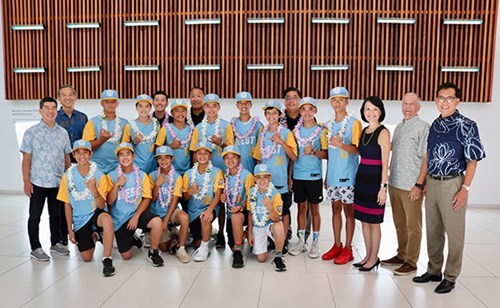