The mural is a product of the work and passion of artist Kamea Hadar, who is a CPB ambassador. It is named “Hoaloha” which means friend or beloved companion. This value represents CPB’s deep rooted connection with its Nisei heritage and the local community. The mural showcases a young child, who is Kamea’s daughter, and CPB’s iconic maneki neco, which is also a friend and beloved companion. The historic insignia of the 442 Regimental Combat Team with the raised hand holding a torch is featured on the child’s shoulder acknowledging CPB’s legacy of the founding members who were World War II nisei veterans and created the bank to help provide all of Hawaii’s people with the financial services they deserved.

“This is a portrait of my daughter. It's a little girl with her first piggy bank. My daughter's name is Nova and on her sleeve she wears a 442 (Regimental Combat Team) patch and that patch is representative of not only her grandfather who was a 442 veteran, but the founders of the bank as well,” said Kamea Hadar, artist. “I've been a customer of the bank since I was Nova’s age. My mom opened my first CPB savings account when I was around five or six and my daughter just turned six and I thought to mark this special day I'll open her savings account. That will help me to remember this day as part of the bank being part of our family's lives and then also this mural being part of the bank’s life.”

“This mural represents CPB’s past, present and future,” said President and Chief Operating Officer Arnold Martines, Central Pacific Bank. “The past is represented with a nod to our legacy which was created by WWII nisei veterans. The maneki neco represents the present as a symbol of our commitment to being a friend and supporter in the community, and the child shows the hope and promise we see in the next generation.”

Additional photos and videos are available for use by clicking here. Please photo courtesy: Central Pacific Bank. The interviews are with:

The mural is available for viewing at Central Pacific Plaza during the building’s normal operating hours Monday through Friday 7 a.m. – 7 p.m.; Saturday 8 a.m. – 2 p.m. and closed on Sunday. 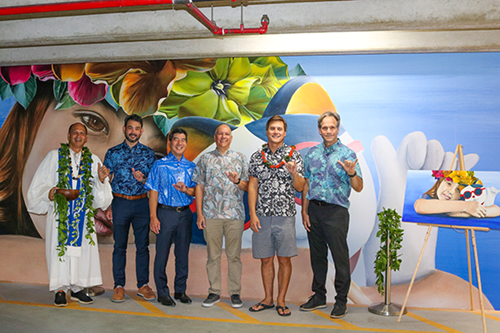 Kamea Hadar grew up in the worlds of his Japanese/Korean mother and Israeli father. He began studying drawing and painting from a young age. As a child he took classes at the Honolulu Art Academy and University of Hawaii; and spent periods living, studying and creating at the Sorbonne in Paris, University of St. Louis in Madrid and the University of Tel Aviv, Israel. He currently resides in Honolulu, HI and is Co-Lead director of POW! WOW! Worldwide. Although Kamea’s work is based in traditional portraiture it has evolved off of the canvas to large scale murals and installations that can be found in cities around the world. For more information please visit: https://kameahadar.com/